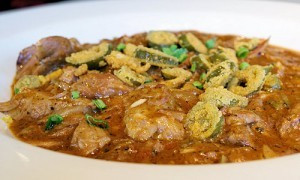 Happy Friday! I had a fabulous food experience last night at the Marigny Brasserie – a great restaurant located on Frenchman St. here in New Orleans. Their grillades and grits were out of this world! Grillades (pronounced GREE-ahds) and grits is a tradition Creole dish served for brunch in South Louisiana, but many restaurants have started offering them on their dinner menu. Grillades are traditionally made with beef or veal and served over grits with a heavy gravy sauce; however, I have found many northern chefs have started substituting pork as the meat. The picture below is from the blog Menu 72 who suggested adding fried okra. Sounds yummy to me! I have shared Chef Kevin Belton’s recipe from his cookbook, Big Kevin’s Bayou Blend Cookbook. He is a regular chef here at the New Orleans School of Cooking. Come and take one of his classes, and learn his recipes first hand!

Cut the meat into 3-inch squares. Season with Big Kevin’s, then dredge in the flour and shake off excess. Heat 2 tablespoons of the cooking oil in a heavy skillet, brown the meat lightly and drain on absorbent paper.

Make a roux in the skillet with 2 tablespoons of flour and the remaining oil, browning until it’s a rich dark color. Add all other ingredients (except the grits) to the roux and simmer until the mixture thickens, about 15 minutes.

Return the meat to the pan, cover the skillet and cook until tender, about 1 hour. Stir often. Serve the grillades and sauce with hot grits. Serves 6.